You are here: Home / Christmas / Merry Christmas from the US Postal Service

I am a super loyal customer of the US Postal Service. I've shipped orders while I was an ebay seller, then etsy seller, as a kit club owner, and for personal things all through the USPS. I have had ALOT of crazy dealings with them though but this holiday season, it seems to be the worst.

The High Desert is no stranger to crimes involving the mail and postal service. Growing up in Phelan, I knew all too well that mail was something that regularly got stolen. Since the houses were spread far apart in this rural area, we had roadside mailboxes which were largely unsecure. 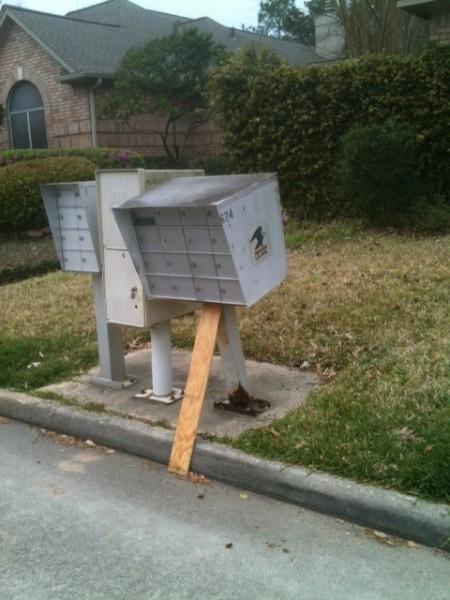 Source: Chron.com – these aren't our mailboxes but they are really similar to the ones we have. Plus, this illustrates how easy they are to damage and steal from.

Then community mailboxes were installed- think of it like a bank of PO boxes on a post. Those were even better targets for criminals because the back can be pried off and now you get not just one person's mail but 24 people's mail. Not long after that, probably when I was in middle school, my family went to using PO Boxes inside the post office and never gave out our physical address again for mail.

So imagine my surprise when I get a phone call from a frantic (and kinda looney! I won't lie…) woman who says she found my ripped open and crumpled Christmas card on the side of the road?!

The new scam is for criminals to apply adhesive to the inside of the mailbox. You slip your mail inside and it sticks to the adhesive, rather than dropping all the way down into the box. Then the criminals come back and fish out the stuck mail, ripping it open to see if there is anything of value inside. They toss your mail (cards, letters, personal stuff) it into the street when they're done. Classy.

I don't think the postal service will do much of anything about this issue. Which is kind of sad. How many people mailed gift cards or money gifts this year and the person who was supposed to get them never got them? And because they don't know which envelopes have anything of value inside, they're taking everything they get and ripping it open. The card I sent did not have a gift card so it was a total waste on all accounts to rip it open. I know you are not supposed to mail cash but people do. I have over $100 in gift cards to clients and design team members that went out in that batch of cards. Who knows who won't get a card now, whose feelings will be hurt. It's a bummer.

The icing on the cake was this lovely package delivery from the Post Office this morning:

A friend mailed this box – it looks like someone at the USPS played football with it and used it as an ottoman for 6 weeks. But that can't be because she mailed it 2 days ago… the bad service needs to end!

Thanks for doing a Mexican hat dance on this gift from my friend, Mr. Postman. Thanks goodness she packed everything well and nothing was damaged! The Post Office is just winning all over the place this holiday season… I hope your packages arrive safe and on time, friends!!  Fingers crossed they catch these bad guys and do some internal fixing…well, a girl can dream.

Keep up with our crafty adventures by subscribing to the Hydrangea Hippo Crafty Newsletter.