You are here: Home / DIY + Crafts / DIY Soccer Goal Can with Duct Tape

What is a soccer goal can? If your kids play soccer then you might know what I am talking about! In our AYSO Region, the parents donate money, usually a few coins, every time the kids on the team make a goal during one of our Saturday games. We don't keep score but this is one way to motivate the kids to play hard and do their very best while trying to learn all the skills needed to play soccer well. The money we collect is then used to fund an AMAZING party at the end of the year for the team. So, the more goals they get, the more awesome the party can be. On the field, there's nowhere to really keep all this money and change so most teams create a container to hold all of the money from game to game and to be passed around to the parents each time the kids make a goal. That's the soccer goal can!

Last year, we altered a piggy bank and named it the “goal pig”. Since we made the goal pig specific to Matthew's team last year, he didn't want to use it for his new team. Of course, mom, duh! We couldn't find the plastic piggy banks anywhere (what's up, Dollar Tree?!) so we had to search for another type of sealable container. Enter oatmeal. Which. is. not. paleo. Well, if I have to take one for the team, I will…

The oatmeal can only cost about $2.50 so even if we didn't eat it, it wasn't expensive. But they don't make oatmeal containers like they used to and this one needed reinforcement and weatherproofing. So we picked up duct tape in the team's colors and brought it all home. I had this grand idea that I would cut the team name from the duct tape with a craft knife. After about 10 seconds of that, I decided to try the Silhouette machine. Here's what happened:

And here is the final product: 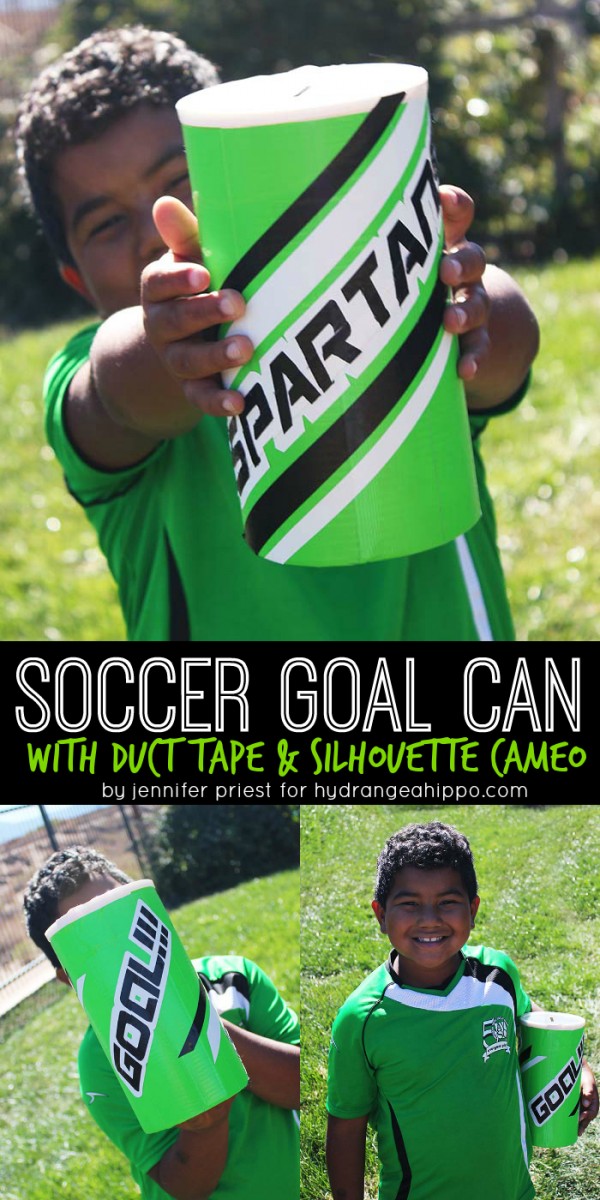 The kids totally love it, which was my goal! They like shaking it and hearing the coins rattle and it's a pretty cool container if I do say so myself. When the season is over, the coach will open the lid, count the money, and the parents will help the kids choose what kind of party to have. I bet we could do a whole mini golf trip, with race cars and money to play the arcade! I know, its for the kids… but they're 4-0-1 and that can is getting heavy. But who's keeping score?

Some of these are affiliate links from which we make a few pennies when you make a purchase. It's like you're throwing some coins to my goal pig….but it doesn't cost you anything extra other than what you're already buying.

Let me know if you do goal cans for your kids' soccer teams! Is this just a California thing?

Keep up with our crafty adventures by subscribing to the Hydrangea Hippo Crafty Newsletter.

Enter your info to join our newsletter and get your free chore chart today!